Bettina Camilla Vestergaard is a visual artist and educator residing in Copenhagen, Denmark.

In her art projects she works with a reflexive approach to the documentary tradition. Photography and its representation play a central role in her works, examining the gaze as a cultural construct, as well as challenging the boundary between reality and fiction. The encounter and interpretation of the foreign and unknown is an ongoing subject of investigation in Vestergaard's projects and she regards the aesthetic as a framework that can open up dialogue across differences.

Her work has been featured in an array of exhibitions in Denmark and abroad at institutions including Fotografisk Center in Copenhagen (DK), Momentum – Biennial for Nordic Contemporary Art in Moss (NO), CCA – Glasgow's Centre for Contemporary Art (SCO), Munich City Museum (DE), BRANDTS - Museum of Art and Visual Culture (DK), the Museum of Contemporary Art in Roskilde (DK) and MAK Center for Art and Architecture in Los Angeles (US). She has published on Ashgate Publishing (UK) and Space Poetry (DK).

Vestergaard has received several grants from The Danish Arts Foundation in whose public collection her work is represented, and she has been awarded artist residencies in Los Angeles, Hanoi and Cairo. For four years she was member of board of directors - Copenhagen Visual Arts Foundation, Denmark and she has served a number of trust positions in artist committees around Denmark.

As part of her practice, Vestergaard passes on her interests, knowledge and experiences through lectures and teaching. She has taught and lectured at the Art Academy Munich, Jutland Art Academy Aarhus, Copenhagen University, Malmö Konsthal and several preparatory schools for young talents around Denmark.

The Ruin Reappears (text in English)
By art historian Maibritt Borgen, 2016
Text published in the book As I Wander Through the Park by Bettina Camilla H. Vestergaard / Space Poetry 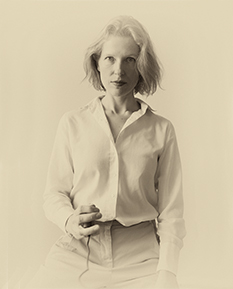